Like any great Nicholas Sparks novel, this story starts out with two strangers. Running into each other miles away from home. This will become the greatest love story ever told. So, grab the rocky road ice cream, a box of tissues, and join us in a good cry as the romance unfolds.

Rachael Sands was student teaching in Texas when she bonded with a fellow mid-western boy over their love of “hot dish”. James, a fellow student teacher, took one look at Rachael and knew this girl was what magic was made of.

James was one of those people who could go to a strangers wedding and leave best friends with everyone there. He is just one of those outgoing, adventures types who just loves to get down with some good old fashion Karaoke. His smile and his tussled brown hair made every girl just swoon. His eyes danced with excitement and adventure.

The type of guy that every girl wishes she could bring home to mom. The man you only see in romance novels and romantic comedies.

Rachael knew he was something special right away.

A few months later they were slow dancing under twinkly lights, they glazed deep into each other’s eyes- love was pouring from their soul. The quiet hum of a romance song faded into the background as they were the only two people on earth in that moment.  It was pure magic!

However, with a dramatic twist- fate came knocking.

James, an athletic guy, set out for a jog on a warm summer day in 2011. Nothing out of the norm. As his feet hit the pavement, the warm sun shined on his back. With his charismatic smile across his face- life changed forever. 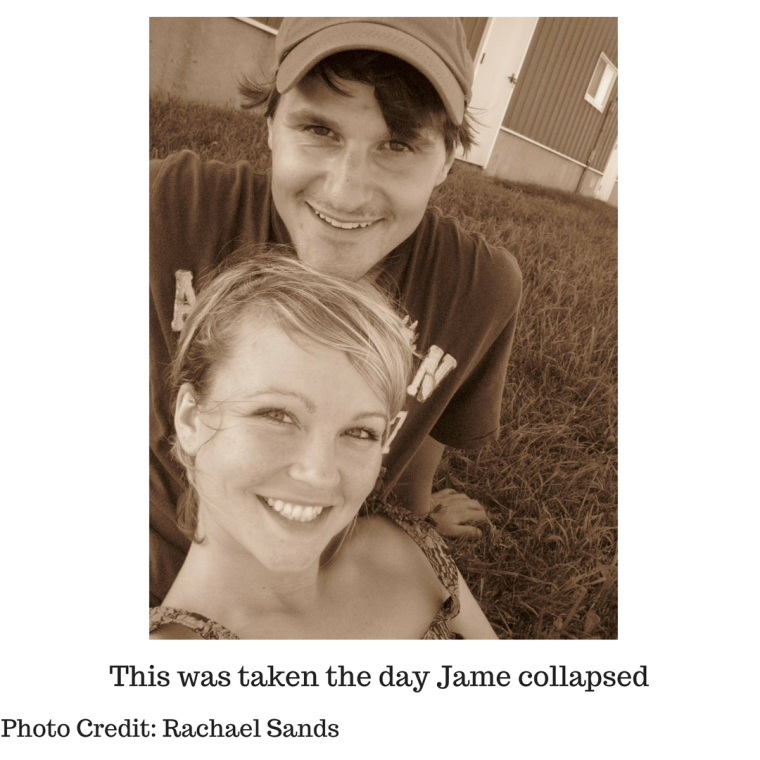 James suffered un-witnessed cardiac arrest on the side of the road. He fell to the ground. A passerby found James in the ditch and started to preform CPR. James was rushed to the hospital.

Rachael, was told the love of her life was only given a 1% chance of surviving.

She was determined not to have her love story stop here! She knew what love was capable of, and she fought enough for the both of them. Racheal’s strong-willed thinking of “if you put your mind to it, it will happen” pushed them both forward in the coming months.

As James’s girlfriend, she never left his side. Printing out prayer cards for local churches, cheering James on as he sat in a self-induced coma for eight months. Rachael never gave up hope, she knew that this was the man she was meant to marry, their love story was not over.

James, slowly woke up. The sparkle was still in his eyes; however, life had changed. James had to relearn everything. Sitting up on his own, walking, brushing his teeth- even simple things like tying his shoes became a challenge.

Rachael never let James’ spirit die. She helped him do everything they did before- traveling the world together, volunteering for non-profits, simple picnics in the park, and most recently rock climb. Yes, James has recently taken up rock climbing.

In 2016, James and Rachael once again slow danced together under twinkly lights at their wedding.  Surrounded by family and friends whom had witnessed this couple’s incredible journey. As the moon light peeked through the old wooden slats of the rustic barn, these two souls danced like they had done years before.

“If you can’t be thankful, how can he bless us with more?” Rachael and James have shown us how important it is to enjoy the now. We all have struggles in life, but you have to take the time to enjoy the moment. Every day is a blessing…